Fiona, the Savage Cow
The image we have of cows is of sweet beasts calmly munching grass all day long as they cling to the sides of the Swiss Alps or lay about on green meadows. They seem largely decorative, full of cowbell-tinkling Swissness – a true symbol of Switzerland’s tamed outdoors.

Farmers inadvertently perpetuate this image by giving their dairy cows names like Fiona, Diana, Bella, Bianca and Nina (the top five favourites) – a fact not always enthusiastically welcomed by women named Fiona, Diana, Bella, Bianca or Nina. Scrolling down the list of other common dairy cow names, we find Heidi (to the annoyance of my mother, who already has other issues with her first name), Senta (my girlfriend; ditto, thanks to her Wagnerian parents) – and Katrin (sigh).

The more observant among you know that many cows in Switzerland don’t have horns, which makes them look even less threatening. But they only seem approachable: the average Swiss cow weighs about 440kg (970lbs) more than you, can get just as cranky as the rest of us, and is as protective of its young as any wild animal.

In recent years, confrontations with cows near hiking trails has escalated: two people have died, one man was trampled – luckily not to death – and a pair of German tourists on their way up a mountain had their path blocked by menacing cows and had to call for help. Another couple escaped the worst only when a rescue helicopter scared off the circling cattle – complete with horns, which they had aimed down at the couple on the ground.

Why are cows becoming so aggressive?

Every year, 200,000 calves are de-horned under anaesthesia. The official reason for this practice is the danger horns pose to people and the animals themselves while they are kept in close indoor quarters during the winter. Unofficially? The more cows that can be packed into a barn, the more money there is to be made.

But in addition to the current trend towards sustainable and green farming, there is also an ongoing campaign led by organisations for the protection of domestic animals to stop the de-horning practice. (One such organisation, KAG Freiland, already has the marketing aspect covered to pay for any expenses building larger barns might incur: by getting farmers to produce and sell “horn milk” as a niche product.)

With animal-friendly farming becoming more and more popular, cows are now often accompanied by their young when they go out into the fields to graze – horns intact. There is no longer a calving season, which means calves can be found out in the fields from spring through to fall. And getting between a mother and her calf – which makes you a clear threat – can of course result in aggressive behaviour on the part of the cow.

Usually cattle farmers make sure not to let volatile animals graze close to hiking paths, but sometimes they have no other option if a certain meadow is ripe for grazing. Bulls are therefore increasingly found out in pastures and have been known to make their presence felt to hikers straying off the beaten path. Reportedly, bulls can get annoyed if they’re spurned by a cow in heat – and might take it out on you.

So now that you’ve developed a sudden fear of cattle, how do you make sure you’re not attacked by excited cows on your way up the mountain? For those who know how to avoid large pieces of wildlife in general, this will sound familiar:

- Don’t leave the path if there are cows around (they tend to be out in the open and aren’t known to sneak up on people, so this should be easy)

- Don’t get closer than 20 meters (20 yards) to a mother with a calf and don’t even think about petting that cute little thing
- Don’t surprise or frighten a cow
- Don’t look a cow directly in the eye
- If you’re feeling menaced, slowly walk backwards away from the animal
- Carry a walking stick; in the worst case you can use it to bop an aggressive cow on the nose
- Keep your dog on a leash so it doesn’t disturb the cattle. Farmers suggest letting it loose if a cow begins to threaten you, but in this case you’ll be using your dog as bait to distract the angry beast, so you may want to think that piece of advice all the way through first.

I’ve had my own uncomfortable moment in bovine company: on a cycling trip from Andermatt over the Gotthard Pass, my girlfriend and I decided to leave the main road, which was choked with stinky traffic, as it is on most warm sunny days. As we pushed our bikes along the hiking trail that follows the valley floor at Gamsteg, we suddenly realised that some 300 cows, which had previously just been grazing or lying about in the sun, where now all standing up and staring at us. When we tried to take the long way around them, they started to follow. Completely unnerved, we ended up going all the way back to the road. Later we worked out the most likely reason for their alarm: the horn-shaped handlebars on our mountain bikes. 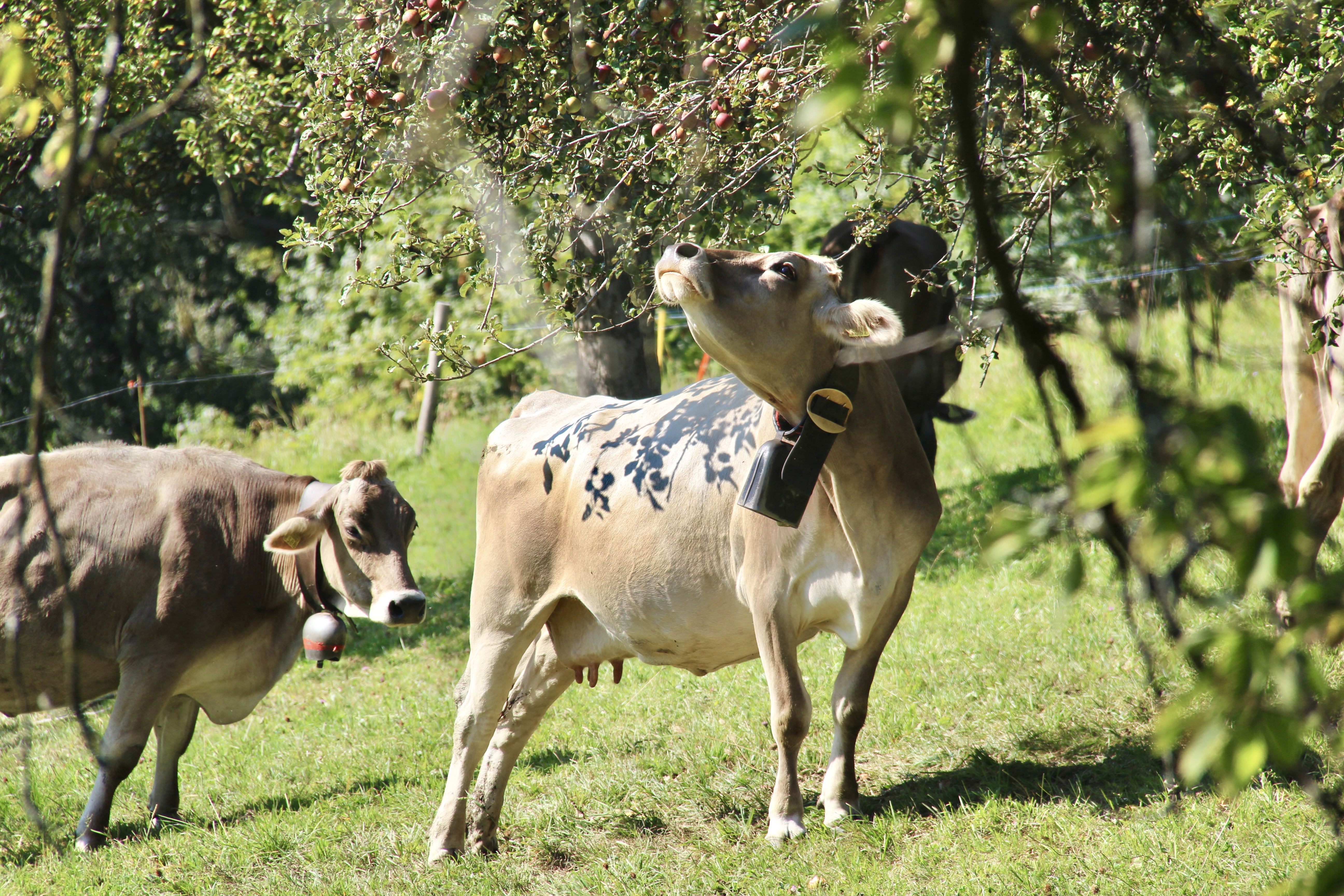