The Wine, the Max and the Wardrobe
The ceiling in our basement storage space has a frightening sag to it and the stucco has broken off in places. Given that our building dates back to the 19th century, I’m nervous enough to think it’s quite possible the next time I stumble down there for another bottle of wine the ceiling may fall in on me. If you don’t hear from me for a while, you now know where to look.

Our plus-size cat Max (if he were a person, he’d drink beer all day watching football on the couch) has taken to whining at the door every morning to go sleep behind the wine rack, where the ceiling slants down and prevents us from pushing the rack all the way to the wall. A few weeks ago, Senta was putting a bottle into one of the slots and ended up poking a bottle out the back, where it landed standing up but leaning against the wall out of reach, where it remains. Max now sleeps beside this bottle of wine almost every day, and if he ever comes back into the apartment smelling strongly of Humagne Rouge 2009, we’ll know the bottle has finally fallen over onto the stone floor.

A builder came by to have a look at the ceiling and declared it to be in relatively good shape; apparently the ceiling just needs to be re-plastered. I’m in the language – not the construction – business, so I’m forced to believe him.

This meant the storage space had to be cleaned out, though, which is not as simple as it sounds. Because it’s a tiny little room and had a huge old wardrobe in it, there since I moved in almost 20 years ago. Senta and I tried to remove it once, but it turned out to be one of those physics-defying objects that may go into a particular space, but not out again. We tipped it this way and that, trying to force it through the doorway, to no avail. Finally we gave up and decided it looked very nice where it was.

But now the ceiling was threatening to cave in and so I went downstairs with our little electrical jigsaw and began cutting the top of the wardrobe off. The back proved tricky, but once I told Senta we possess a small sledge hammer she got a gleam in her eye and went at it, adding a few quick wen-do kicks harking back to her women’s studies past. Soon the wardrobe was subdued and lying around in pieces. All we needed to do now was get rid of the debris, plus a few more things that had been mouldering down there for the past decade or so – those bits and bobs of wood & metal and paints I was sure would be useful for a home improvement project someday. That project now turned out to consist of throwing everything away.

The city of Zurich has a nice service where you heave everything onto the sidewalk and they come by with a garbage truck and cart it all away for about 90 bucks. The only condition is that it all has to be ready before 7 am. They said they could come on Monday.

So far so good, but there’s a law against making work noise before 7 am without a permit. And as we know, in Switzerland you can’t work outside on a Sunday. I don’t know what it’s like at your house, but at mine the sidewalk is outside.

Getting around the Sunday rule and putting everything out on Saturday is dangerous. First of all, because you might get fined for leaving junk all over the sidewalk, and secondly, because crafty people have been known to add things to your pile, increasing the time the garbage men have to spend removing it and thus incurring higher charges and stiffing you with the bill. I don’t know who these people are who drive around with garbage in their cars, but there it is.

I finally decided that carrying a few things out to the sidewalk on a Sunday evening was preferable to waking my neighbours at 5 am on a Monday morning by clunking around in the basement. Plus, although I tend to be a morning person, I like to wait until it’s actually morning to do so.

I got right down to it by lifting up one of the bigger pieces of chopped-up wardrobe and taking out the bare light bulb and half the fixture in the ceiling with it. I stood there in the pitch dark, holding on to a massive piece of wood with glass and ceramic splinters all over the floor. Luckily there’s a light it the hallway, only it’s on a timer so I had to duck out there to switch it back on every 2 minutes or so. Finally I the job got done: half the storage space is cleaned out so the builder has room to work – and now you can really see the sag in the crumbling ceiling. And I’m wondering if maybe we’ll just declare the room as Max’s private sleeping quarters.

Somehow we’ll teach him to bring the wine upstairs. 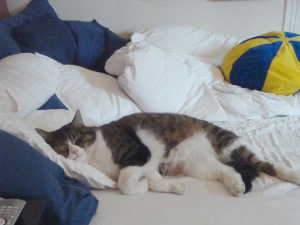